The plant known as Goji belongs to the Lycium barbarum species, and it is a shrub less than 3 meters high, originally from China. It is a relative of tomatoes, potatoes, or peppers since it is classified within the Solanaceae family. It produces fruits known as Goji berries or Goji cherries, widely used since ancient times in the natural medicine of the East, and consumed today as dehydrated fruit. Let’s discover growing goji berries.

These berries are highly valued for their supposed health benefits, and the truth is that they seem to have great antioxidant power. They are very rich in amino acids, vitamins, and trace elements, among other beneficial substances.

But these berries also have a dark side, at least those from China – which are the majority – and it is that they apparently contain heavy metals in worrying concentrations and traces of many pesticides, some of them not authorized.

It remains to be known if these compounds dangerous to health are present in berries due to how and where they are grown – pesticides obviously are – or if these plants tend to accumulate them naturally – in the case of metals heavy.

In any case, everything seems to come together so that we grow our own Goji berries without pesticides and in our orchard, patio, or garden. They will undoubtedly be much healthier than those others.

Before telling how to grow it, let’s see what preferences this plant has, so it will be easier to get the location and care right. 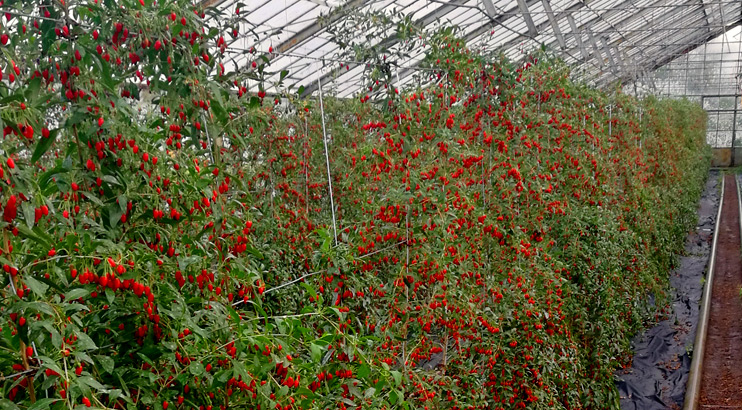 It is a rustic plant that prefers dry and warm climates but tolerates low temperatures quite well – down to -20ºC. It does not like excess humidity, but it can also live in humid climates, although it is not ideal. It does best in full sun, especially when you want it to produce quality fruit or with some shade in very sunny climates.

It prefers somewhat limestone (basic) but can also live in slightly acidic and neutral soils. Agricultural lime or wood ash can be added to very acid soils. This will help raise the pH as the soil becomes more chalky. It tolerates salinity well and can be grown near the sea or in saline lands. It prefers dry, well-drained soils. Those that remain waterlogged or very humid are not favorable to him. Therefore, the more sandy, the better and the worse, the more clayey. In flat areas, you can build or take advantage of elevations of the land, in which the soil will remain much better drained.

As always, it can be done in at least two or three different ways, but choosing one or the other will depend on the availability of the plant material – seeds, plants, or parts of them – and the rush.

They can be purchased online at a physical gardening store, although they rarely have them. Since fruit maturation occurs naturally between late summer and early fall, the seeds should be sown in late winter and early spring. You can sow them two by two in yogurt glasses or small pots, covering them very superficially with less than 1 cm of the substrate. The substrate uses a special one for seedlings or simply coconut fiber with little worm castings.

This option is perhaps the fastest, although it means paying a little more than for the seeds. It’s all about locating a nursery or gardening establishment that sells potted Goji plants. In large garden areas or through the internet, it is quite easy to find. If it is bought in a pot, as it should be, it can be transplanted to the ground or the container in which it will grow, at any time of the year, although it is best in early spring. At the time of transplantation, it is very important to choose the place well. You have the keys above in the Goji preferences section.

Finally, if a neighbor, relative, or friend has a goji, you can ask them to let you cut a piece of the young branch – better several -, and use it to make cuttings. In short, it is about putting those branch fragments to root so that, after a while, they can become independent plants and begin to develop.

As it is a rustic plant, the care it requires is really little. As long as the place was chosen to grow, it is according to your preferences.

Very little. Only when the ground starts to get very dry. Goji prefers a soil with a shortage of water over one that is too wet or waterlogged. On sandy and raised soils, you can water more often since they hardly retain water. On the other hand, the more clayey and flat – or depressed – they are, the irrigations have to be widely spaced, and as has already been said, it would be ideal for planting it in a natural or artificial elevation of the land.

Frequent low-intensity pruning benefits it, as they help the bush to become denser and stronger. As with any cultivated plant, care must be taken to frequently eliminate the spontaneous vegetation that will surely grow around it, since if this is not done, it will be strong competition for the bush. Once it begins to bear fruit, it is necessary to protect them from birds with a net or another effective system. Failure to do so will eat almost all the berries in no time.

What is a Sugar Baby?

Fri Apr 23 , 2021
The word websites “sugar baby” has many associations. It can suggest a young girl, a faithful girlfriend, or maybe a child. In many cases, a woman can be paid to maintain your child of a gentleman, a practice known as “sugar online dating. ” In return for these party favors, […]